History of the Spice Trade

From the Silk Road to the Present Day

The ancient 'Silk Road' from China to europe was a network of interconnected overland trade routes, being so named because of the importance of the silk trade from China to Europe. By Roman times the route was becoming economically significant, and of course silk was by no means the only traded item.

The Chinese dealt in rare and hence valuable spices, keeping the source secret. Thus began the spice trade, exotic flavours which were only available to those who could afford them. 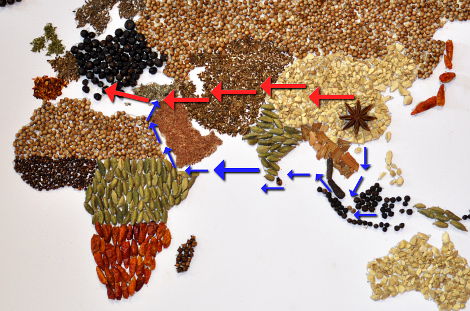 Man's ability to travel by sea was now developing well, and by the fourteenth century arabic merchants had established sea routes all the way to the Moloccas, known as the spice islands and situated just North of Australia. Venetian merchants monopolised the trade in Europe.

Spices became a sign of wealth, craved not only for their flavour but also for the prestige associated with them.

After the Ottoman's captured Constantinople (now Istanbul) in 1453 they were able to put strict controls on the trade, and the Europeans became desperate for an alternate route. 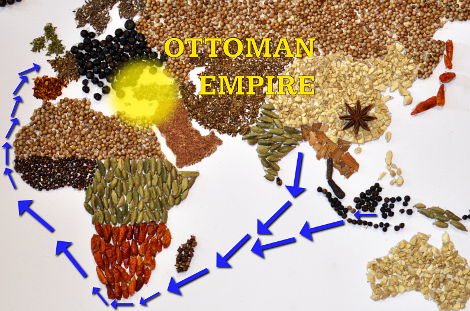 In 1488 the Portugese explorer Bartolomeu Dias was the first to go around the Southern tip of Africa and thus prove that an alternate route to India and beyond existed. There was thena break of a decade before another attempt was made, the difficult and dangerous weather conditions around the Cape of Good Hope no doubt being a factor.

The ruthless explorer Vasco da Gamma reached Calcutta, India on 20 May 1498, leading to the establishment of a direct trade that bypassed the middle eastern middle men who had up to then been able to name their price, and named it high, Da Gamma went well armed, and showed no mercy to any existing traders that he encountered.

The route the the Moloccas, source of cloves, nutmeg and mace were now open to sea trade, and the various European factions competed heavily for control. By 1600 the Dutch had arrived, eventually establishing a monopoly.

These days the ability to transport freight has increased to the extent that spices can easily be imported from anywhere in the world. Below we see examples of the diverse sources of supply which are available to Camstar.

Camstar have connections with all the major growing areas, and with their extensive warehousing facilities we are able to offer year round supply at contracted prices.