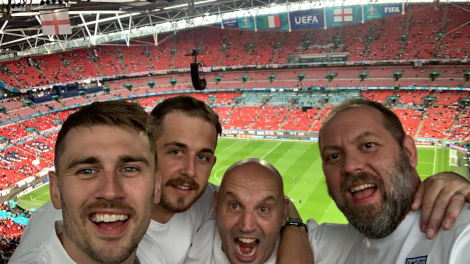 The picture that says it all, from left to right Gavin Keach (Operations Manager), Jack Pickerden (Quality Assurance Manager), Paul Williams (Assistant Warehouse Manager) and Neil Harkett (Warehouse Manager). None of them expected to be there, but somehow CEO Ed Starke managed to swing it and here they are at the Euro 2020 Final.
Neil Harkett says it was "the experience of a lifetime", and his bank certainly agreed, during the associated revelries they stepped in and stopped his credit card due to unusual activity. A quick phone call ensued, and Neil was able to persuade them that not only was he really at Wembley, but he was also having a really good time and would like to carry on.
Paul Williams was at first reticent to describe the experience, something to do with the final score, but had clearly also had a great time and gave the experience an overall rating of "awesome".