Medicinal use started in India with the ancient Siddhi system, with it being used internally to treat indigestion, colds and liver problems as well as externally on wounds and sores.  Today there are ongoing investigations into the positive medicinal properties of Turmeric, with the possibility being considered that it can treat such diseases as heart problems, arthritus and even cancer.
The main active ingredient is curcumin which gives a distinctive earthy. peppery taste with a hint of bitterness. Curcumin is itself widely used as a food colour, also known as E100. 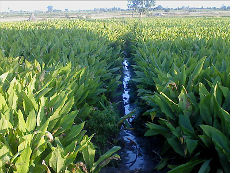 Cuisines throughout the world benefit greatly from the properties of Turmeric, with a great many recipes depending on it. In India it's widely used in vegetable and meat dishes for its flavour and colour. While the fresh rhizomes can be used it's more common for them to be boiled dried and ground to produce the distinctive deep yellow/orange powder which is essential in many curries.
It's widely used in the Middle East, for instance the cooking of Persian khoresh dishes always commences with the caramelisation of onions in a mixture of oil and turmeric.
In Vietnam the spice is used in stir fries and soups, while in Thailand and Cambodia it's often the raw rhizome which is used. Not surprisingly that's how Thai 'Yellow Curry' gets colour.
While it's not considered a direct replacement for Saffron, its lower price means its often been used as a substitute. Indeed in Medieval Europe it was known as 'Indian Saffron' and its often used in Spanish 'Paella'. Its ability to give a rich yellow colour to boiled white rice is often exploited in South Africa.

One more interesting property of this plant is that it can actual be used to make a substitute for litmus paper. Paper is steeped in the juices from Turmeric and allowed to dry, after which it shows it's expected yellow colour when dipped in acid solutions, but turns brown in alkali.
In addition to being able to supply from the Indian market Camstar now have access to a good supply of high curcumin turmeric from Indonesia.