Rosemary is native to the Mediterranean and Asia, but is also able to in regions with colder climates. It's also able to survive for long periods with very little water. The main commercial growing areas are Morocco, Turkey and Spain.

It's often grown as an ornamental plant in gardens, an attractive small shrub which also provides the gardener with the chance to snip off a few twigs for use in cooking. 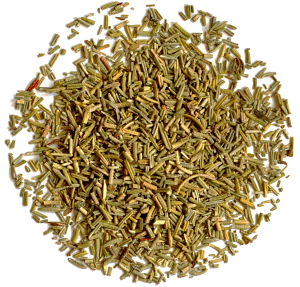 With it's distinctive strong aromatic flavour Rosemary has been used for thousands of years in cooking. A few sprigs can be added to roasts, whether meat or vegetable, and  it's a good addition to a bouquet garni or a stuffing. Whilewidely used it's particularly associated with Italian cuisine, often in association with garlic.

Heathwise rosemary attracts numerous claims of benefits, with the ability to improve memory having been traditionally ascribed to it's odour. Indeed, sales to students increased dramatically after newspaper reports of a recent study. While the science behind that claim is not proven it's certainly true that rosemary is rich in essential oils which have anti-inflammation, anti-fungal, antibacterial, and antiseptic properties. It also contains salicylic acid, the forerunner of aspirin, so there may be some value in it's use to treat aches and pains.

Rosemary was considered sacred to the ancient Egyptians, Romans and Greeks and is featured in a myth concering the Virgin Mary. It's said that the flowers of the plant got their blue colour when she spread her cloak over a bush while resting.

Camstar can supply cut and ground rosemary to your requirements, if you can't find what you need on our product list be sure to contact us, as we're always expanding our product inventory.