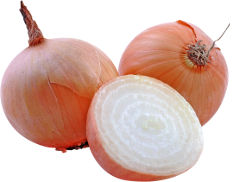 The cultivated onion, Allium cepa, is grown all over the world with China and India being the major producers. It's unknown in the wild, but is thought to have originated from wild growing species in Central Asia.

Earliest signs of onion usage are from the Bronze age, 7000 years ago, although these wouldn't have been the same species that we have today. The ancient Egyptians were fond of it to the extent that they thought it worthy of worship, believing that the layered structure of the vegetable symbolised eternal life.

The Ancient Greece athletes consumed vast quantities in the belief that their performance would be improved, while Roman Gladiators prefered to apply them externally as a muscle rub. 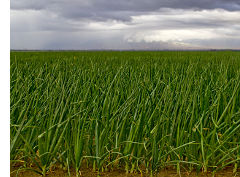 The Pilgrim fathers, when they became disillusioned with Europe and set out for America took with them Allium cepa, and recorded that this was the first vegetable that they cultivated. Meanwhile Native Americans were happy to consume wild growing Allium tricoccum.

In culinary terms the onion is without equal, it's used worldwide and must feature in almost every meal. From French Onion soup, to Indian Onion Bhaji's it has a vast range of uses, capable of being fried, grilled, roasted, baked, pickled, boiled, braised, sautéed, or eaten raw. Mostly it's used as an essential ingredient in cooked dishes, for instance curries, gravies and soups, however lets not forget that English favourite snack, the pickled onion. 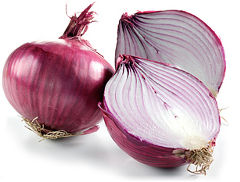 As is usual with cultivated plants there are a number of varieties, with the main classification being by colour. Brown onions are the most common, with their strong astringent taste which develops sweetness on cooking. Red onions are milder and have a striking reddish purple colour that can brighten up the presentation of a dish. White onions are traditionally used in Mexican cuisine,  being particularly sweet when cooked.

Much of world trade is in dried onion. There are a wide range of products, from powders to diced and available dried, roast and kibbled. These offer manufacturers a product with long shelf life which can provide the classic onion flavour notes in a convenient to use format.