Cloves are native to the Molucca Islands in Indonesia, and until modern times this was the only source of this important spice, indeed the Moluccas are also known as the 'Spice Islands'. Evidence of the clove trade goes back a long way, with the oldest discovery being a Syrian pot containing cloves that was able to be dated fairly accurately to around 1721BC.

In the 17th Century the Dutch were keen to monopolise any trade in spices that they could, including cloves. They attempted to eradicate cloves from all but one of the Molucca islands so that they would be able keep control more easily, but couldn't prevent the export of plants to around the world. The brutal Dutch regime turned the local people against them, and they were thus happy enough to co-operate with competitors from other nations. 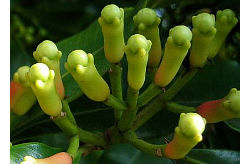 These days cloves, the flower buds of a tree in the family Myrtaceaeare, are grown in  Indonesia, India, Madagascar, Zanzibar (Tanzania), Pakistan and Sri Lanka, with Indonesia being the major exporter.

Cloves are used in cooking all round the world, although they more often associated with Asian cuisine. In India the distinctive strong taste is popular in curries, and they form a constituent of the well known Chinese 5 Spice. In England the clove is an essential addition for a traditional apple pie, while in the U.S.A. it's often added to pumpkin pie. The taste is strongly aromatic and can easily be overpowering so when used in spice blends it's common to use only half as much clove as other ingredients. 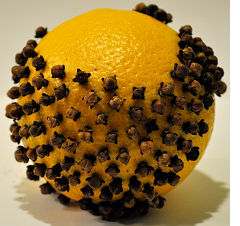 Due to a high concentration of eugenol, the chemical most responsible for the flavour, cloves are anti-fungal, antibacterial, antiseptic and analgesic. Traditional uses tended, however, to focus on the odour given off. A 'pomander' would be made by pushing the stalk end of the cloves into an orange. The resultant strongly smelling ball would be carried around as a way to prevent infections due to it's ability to mask 'bad smells'.

Best known use of Clove is as a dental analgesic, a small amount placed into a cavity is said to bring relief. A lesser known property is its ability to produce anaethesia in fish when introduced into their water, apparently an essential technique for piscine veterinarians. 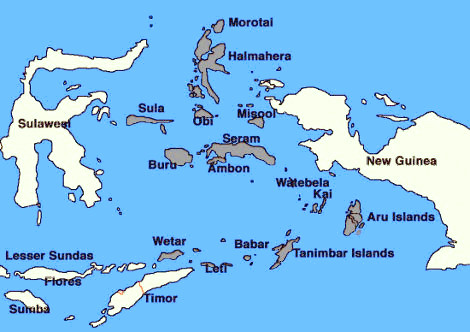